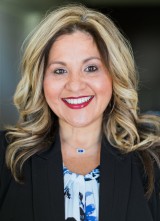 Esther began her career with Texas American Insurers in February 2001, as the Customer Service Representative and Office Manager of our Lubbock office. Esther enjoys meeting new people and developing a business relationship that enables them to have the best coverage at the best price. Esther and her husband Carlos have 4 children between the both of them. Esther cherishes spending time with her two grandchildren Serenity & Braxton who bring so much joy to her life. In her free time, she enjoys shopping, movies and traveling, but mostly spending time with her family at every opportunity.

Return to the staff page.